I have found the definition of a band “making it.” If you can open a show with a mid-tempo bonus track and the audience reacts like it is your biggest single, you have made it. And that is exactly what fun. did last night. 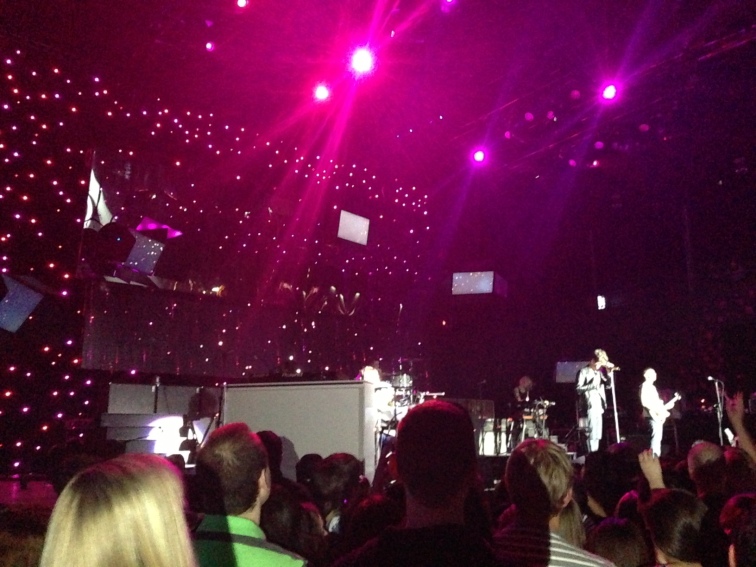 Starting with Out on the Town, the bonus track off their hit album Some Nights, fun. played a blistering hour and a half set to a sold out crowd at the Bayou Music Center. The audience sang every word and loved every note played. Bananas and Mardi Gras beads were thrown on the stage, Nate (the singer) informed us that we were all his Valentine, and a great time was had by all.

Now, if you read this blog, you know I’m a big fan of this band. I reviewed their album last February (with stupidly obvious pun and all) and named it #2 on my favorite albums of 2012. But wow, their performance was incredible. Live, musically speaking, they play more like an orchestra. The drummer didn’t do the standard 8th note high-hats with snare on 2 and 4. His playing reminded me more of a timpani player. Or a hip-hop song. Either way works. Andrew’s piano parts were the driving force of so many songs and as a piano player, I loved that. Jack always plays his guitar energetically and his parts always fit the song perfectly. That said, during an acoustic set, Jack really showed his talent on the acoustic guitar. His finger picking, his strum patterns, and even his solos on the acoustic were incredible. And of course, Nate was all over the stage singing all over the treble clef. Damn, he can hit some notes. On pitch, too!