Hey everyone, sorry it’s been a while. We’ve been active but it hasn’t reflected in my blog. We had a long weekend in Kanchanaburi that I should have written about. Oh, well, what’s past is past. Let’s get to our trip to Vietnam.

So we planned a 6-day trip to Vietnam, starting in Central Vietnam and ending in the south. We had accommodations for the first two nights but left the second two open depending on what we liked about the few cities we’d visit and then we had two nights in Ho Chi Minh City.

Flying in to Da Nang International Airport on midday Sunday, we wanted to go straight to the beach (more to get it out of the way than anything [I don’t really like beaches]). Our AirBnb scheduled us a private car to drive us the 30 minutes or so to the beaches outside Hoi An. Getting there, we were welcomed to the cutest little bungalow by the sweetest host I’ve ever met. The name was Lido Homestay and it was a one minute walk from the beach and incredibly affordable. After settling in, we headed to the beach. After lunch and a bit of time on the beach, we headed back to the homestay, had a shower then called a taxi to go to Hoi An Ancient Town.

As soon as we were dropped off, we fell in love with Hoi An. The old town is a beautiful blend of Southeast Asian and foreign architecture that was a major port from the 15th to 19th centuries. A large portion of the old town does not allow cars at certain times so it’s an incredibly enjoyable stroll through the city. Especially at night. Because of lanterns. Paper lanterns. Everywhere. Every. Where. I also found a Dr Pepper, so there’s that. 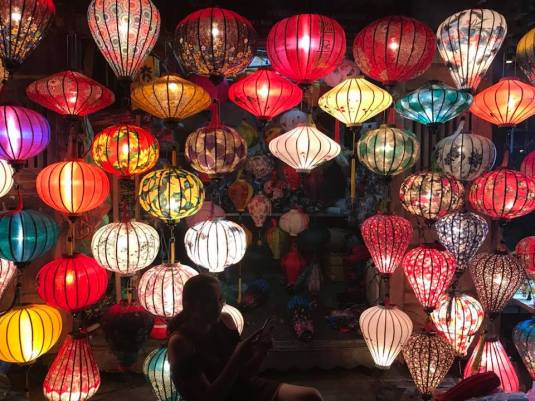 So we’re usually not the type to book fancy tours, especially not ones that cover multiple days. We travel at our own pace and spontaneity and don’t want anybody messing with that. That said, sometimes it’s just too difficult to figure out the logistics and a tour is the best option. This was us when I was trying to figure out how to fit in all the history in Central Vietnam (especially Vietnam War stuff). The traveling between locations was difficult enough. So we found and booked a two-day historical tour of Hue and the surrounding areas. It was a group tour that could have been as large as ten people but somehow it ended up being just Halie and I. Private tour for the win.

We were picked up early on our second day in Hoi An. We had a multiple-hour drive ahead of us through the mountains towards Hue. Our tour guide, Key, informed us we’d be taking the long route there up and over the mountains along the sea and then lagoon. Sounds good to us. And the sights were incredible:

After the breathtaking drive through the mountain, our first stop was the tomb of the 12th Emperor of the Nguyen Dynasty, Khai Dinh.  He was a hated king that forced 10,000 people to build his tomb. During the construction, around half of the workers died! Unfortunately, his tomb is still an impressive sight to behold. I’ll add an album at the end of the blog that’ll have many more photos. 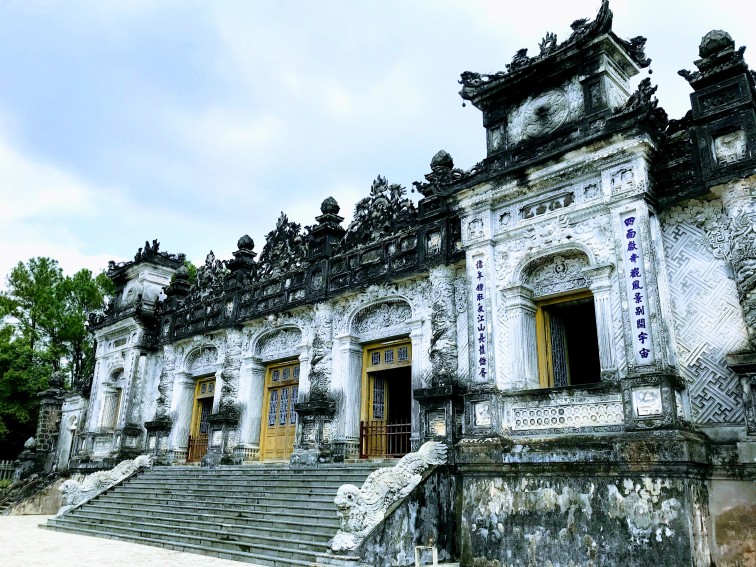 Leaving the Emperor where he lies, we visited a serene pagoda on the edge of the Perfume River then took a short cruise down to the entrance of the Imperial City, which was the nation’s capitol and the seat of the Nguyen Dynasty from 1802 to 1045. Most of the city was destroyed during American bombing in the Vietnam War but the buildings that still stand and the bit of reconstruction that has been completed shows the splendor (and excess) of the Nguyen emperors. 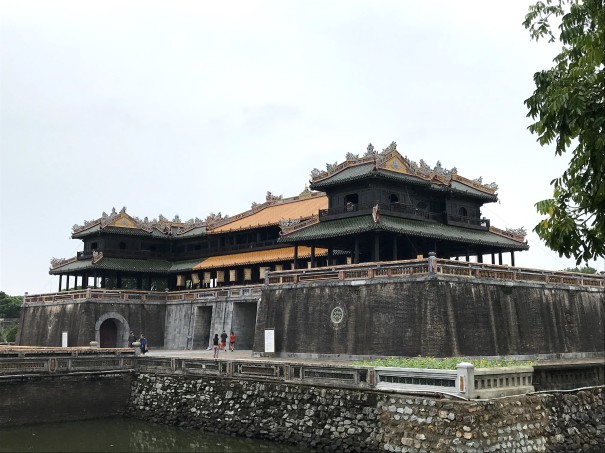 Back to the hotel, Halie and I indulged in a spa package (treat yo’ self). Then the tour guide picked us back up for dinner.

Day two was another early pick up by the tour guide because we had to head even farther north towards the old border between North and South Vietnam and the Demilitarization Zone (DMZ). We were first brought to an out of the way museum about the residual horrors leftover from the war, mainly in the form of land mines. Since the end of the war, unexploded bombs and landmines have caused more than 100,000 injuries and fatalities. But there are numerous organizations working their butts off locating and dismantling the bombs. We then headed towards the actual border, the Ben Hai River, that divided north and south and experiences the brunt of the violence.

After walking around the area and across the river, we then headed even farther north to see the Vinh Moc Tunnels. I first learned about these tunnels watching Anthony Bourdain’s Parts Unknown. For 6 years, the villagers in this area lived in tunnels while the insistent bombing from American planes made it impossible to be at the ground level. As America build better bombs that would penetrate deeper, the villages kept digging deeper. By the third level, they were 30 meters deep (almost 100 feet). Not a single villager died and even 17 children were born during these 6 years!! 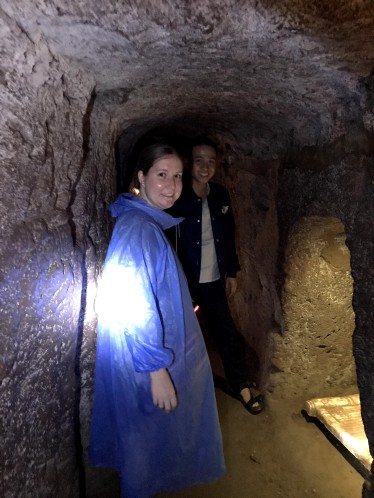 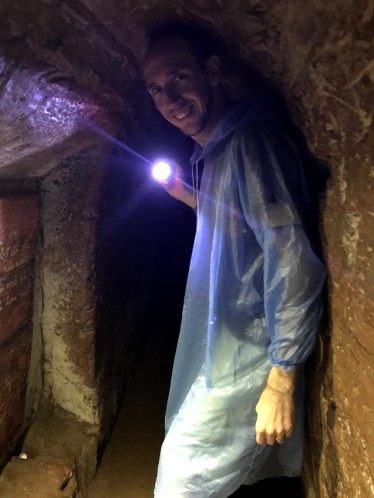 Okay,  realized this blog is getting kinda long so I’m going to cut it off here. Link to Part 2 of our trip to Vietnam.

Here’s more photos from the days I’ve spoken of so far.

One thought on “Our Week in Vietnam, Part 1”