Today we’re talking about three more of the 100 greatest novels. Two of them are by what is all too rare in this list, a woman! Finally. After this, I’ll probably only have one more post in this series for the last four books. Can you believe that!? Let’s get to it.

This book is somewhat unique (for this list, at least) because it was written as a prequel to Charlotte Bronte’s novel Jane Eyre. If you’re familiar with that book, this novel is the background of Mr. Rochester’s marriage that Jane learns a little about. If you’re not familiar with Jane Eyre, don’t worry. It’s not necessary to read and/or enjoy this novel. The story follows Antoinette Cosway’s childhood in Jamaica into her unhappy marriage with Mr. Rochester. This quick and easy to read novel also delves into many heavy issues. Racial inequality, the relationship between men and women, colonialism, displacement, all this plays a part in this novel.

Under the Net by Iris Murdoch

This novel was a lot of fun to read. Set in London, it follows a young author as he’s kicked out of where he’s staying. His complex relationships with the lady who owned his flat and a pair of beautiful twins are thoroughly picked apart throughout his roaming. He get’s mixed up with the film rights of a French novel, philosophizes with an unnecessarily rich man, steals a movie star dog, almost becomes a Socialist, get’s an actual job for once, loses the job, makes a quick trip to Paris, decides he’s in love with a few different women…all in the few pages of this novel. Sometimes hilarious, sometimes sad, this book was always entertaining. 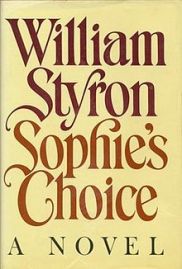 Some of you might be familiar with the movie that’s based off this novel featuring Meryl Streep. I haven’t seen the move so I can’t compare the two or tell you how closely one follows the other. Anyway, Sophie’s Choice. This was an incredibly fascinating novel for a few different reasons. First, one of the main characters, Sophie, is a Polish Catholic survivor of Auschwitz and the novel is set in 1947. I’m not too familiar with that many novels about Holocaust survivors just a few years after the end of WWII. Usually, it’s about their experiences during the war, not after. And although Sophie’s Choice touches on most of Sophie’s experiences in and before Auschwitz, it’s still very interesting to read about her issues with survival: guilt and physical health being too of the biggest issues.

I’m kind of jumping around…let me tell you a little what the book is about. It’s narrated by Stingo, a 23-year old aspiring writer who moves to Brooklyn. At his new boarding house, he gets drawn into the tumultuous relationship between Sophie and Nathan, an American Jew who seems to be a genius. They have some of the most violent and emotionally intense arguments, have unnecessarily loud sex above Stingo’s bedroom and deeply discuss classical music and literature. All of this with Stingo hovering on the edge of their story, falling madly in love with Sophie. Through the novel, we slowly learn about Sophie’s life before WWII and her experiences in Auschwitz. Her story during the war and her story in the Brooklyn boarding house both lead her to a “choice” she has to make. A choice between life and death for too many people she cares about. I’ll let you read the novel (or I guess watch the movie) to figure out what choices she has to make and what consequences they lead to.

That’s it for today. The next novel is The Sheltering Sky by Paul Bowles. I have a few ideas for some other blogs. You might see a few of those before the final post in the 100 greatest novels series. Until next time.