Well, these next three books from Modern Library’s 100 greatest novels bring us to some new locations that we haven’t really dealt with in the list. We have interesting stories, new locations, and authors that I’m not too familiar with. Exciting! Alright, let’s go ahead and get into it.

A High Wind in Jamaica by Richard Hughes

This first novel is an incredibly odd and almost fanciful story. Following some British children who live in Jamaica in the mid-1800s, the story begins with their house being destroyed by a hurricane. This prompts the parents to send the children back to England. While on the journey, their ship is commandeered by pirates. Ultimately the children end up on the pirate ship and the rest of the story is the events the children deal with as they travel on a pirate ship. I won’t spoil the rest of the story but what was so enjoyable was that the plot was near enough to being unbelievable that I never knew what was going to happen next. And written from the childrens’ point of view, all the horrific events have somewhat of a dream-like quality to it. All of this really makes for a quick, hilarious, and sometimes dark story. 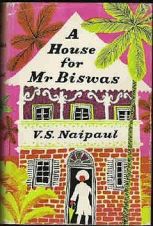 A House for Mr. Biswas by V. S. Naipaul

Now, to continue with the Caribbean locations and the odd stories, we move to A House for Mr. Biswas. Mr. Biswas is born on the island of Trinidad to an Indian family and this story follows him from his birth to his death. He’s not really likable, his family isn’t. He marries an unlikable woman, moves in with her unlikable family. Has some unlikable children and everybody is mean to everybody else. We follow him from job to job and from living quarters to living quarters until he finally buys his own (unlikable) house. And then he dies. That’s about it for the story. Really, I guess, the story is about someone who is trying to break out of traditional family roles and become a man of the modern world. Make his own money, live his own life.

With all this said, it was an enjoyable novel. The writing is incredible. You feel what Mr. Biswas feels, you see what he sees. The story can frustrate you, enrage you, and make you laugh. And what else can we ask from a novel?

The Day of the Locust by Nathaniel West

This next novel somewhat keeps up the tropical theme. We’re now in California, Los Angeles to be exact. We’re in the middle of the Great Depression and following numerous characters trying to make it in the movie business. Without really talking about or even barely hinting at the depression, the main character makes some impressive revelations about the people he sees around him. And knowing about the Great Depression it is easy to make the connection between what he’s experiencing and what we’ve learned about the hardships of people during this time period. Following numerous characters making poor decision, this novel is a quick and fun read. Everyone we meet is pretty odd. They interact in odd ways. And we get to enjoy. So I wanted to show you the last paragraph of the novel because it made me laugh. Near the end, the main character gets stuck in a rowdy crowd that ends up becoming a violent mob. He’s ultimately saved by some cops and we get this ending:

“He was carried through the exit to the back street and lifted into a police car. The siren began to scream and at first he thought he was making the noise himself. He felt his lips with his hands. They were clamped tight. He knew then it was the siren. For some reason this made him laugh and he began to imitate the siren as loud as he could.”

Alright, we’re one novel away from being in the last quarter of the list. It’s crazy to think about. We almost might finish this thing. Until next time…