As we keep moving along, getting closer to the finish line, here’s three more of the 100 greatest novels. Let’s go ahead and get to it…

Have any of you seen the film Boyhood? If so, it would be easy to compare this novel to that film. But only if the film started when the main character was much younger and followed them further into his adulthood. The novel starts with a nine year old Phillip Carey dealing with his mother’s death and follows him for a number of years. Phillip goes off to school, decides to drop school to follow different careers, and has numerous philosophical and physical struggles with who he is and what he’s supposed to do with life. He has numerous frustrating relationships with women and plenty of humorous and frustrating friendships. This novel is actually a pretty lengthy novel but it reads as Boyhood is portrayed. Following the events of a mundane life through the growth of a person. In the movie and this novel, I continuously expected some kind of dramatic event to happen and usually, it didn’t. You could make the argument that this means the novel or the movie is boring or you could make the argument that this means we are so conditioned to expect drama and unbelievable events that we don’t know what to do when a book or movie does not provide us with this. Anyways, while this was a slow moving and undramatic novel, I still really enjoyed reading it and looked forward to each new decision Phillip made about his life. I know I saw a lot of myself in him, not being completely sure what he desires to do for the rest of his life and seeing the easy road and the more alluring road and trying to decide which is better.

Heart of Darkness by Joseph Conrad 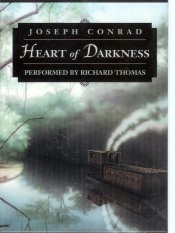 This is a short and interesting novella. The story follows Marlow, the narrator, as he transports ivory down the Congo River in Africa. At times a damning presentation of European colonization and a racist depiction of civilization around the Congo, the book can be a frustrating read. But in the end the question is if the racism is there because that was the belief and images of Africa at the time or if it represents the actual beliefs of Joseph Conrad (the story is based on his experiences and travels in Africa). If it’s the former, than this is an important novella to question the importance and effectiveness of European colonization in Africa. If it’s the latter, than it’s an unnecessary story that as long as it continues to be read, it will continue to promote incorrect images of Africa then and now. I don’t really know who’s job it would be to decide this. Maybe nobody’s, maybe everybody’s. That said, if you have any interest in this time period or love a good boating story, it’s a quick read for you.

This novel is a complete criticism of small-town life. Because of being raised in a smaller town and moving to a major city as soon as possible, I connected to a lot of what this novel tries to say. The story is about Carol, a young woman from Saint Paul, Minnesota, and her marriage to a small-town doctor. He convinces her to move to Gopher Prairie and ultimately, she could not have prepared herself for how much she disliked the town. But she decides that with her education and experience, she can transform the town into a cultured and beautiful mecca in the midwest. Coming up against small town politics, cliques, conservatism, backstabbing, and hypocrisy, it’s difficult to say she was successful. Then she starts making friends outside of her social class and this will create all new kinds of trouble. Although the story gets long-winded at parts and can seem somewhat meandering, I did enjoy it as a whole. The historical context of being set around World War I and the years leading up to Prohibition and the twenties also added great social insight into America at the end of our isolationism. But the best part of the novel might have been that my edition had pictures of different Main Streets from around the world to showcase how similar they all look and, we can assume, act.

It’s feeling pretty good getting farther down the list. Next is #69, The House of Mirth by Edith Wharton. I hated her novel Ethan Frome in high school so let’s see how this goes.