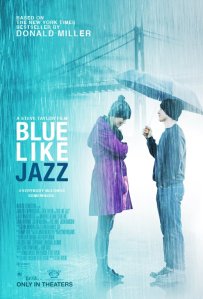 After 5 years of writing, funding, nearly quitting, being saved by the fans, filming, editing, and marketing, Blue Like Jazz was finally released in theaters this past weekend. As a big fan of the book and an associate producer of the movie (because of being a Kickstarter backer, not any actual producing), I was very excited to see the film Saturday night. And it was great.

Not knowing how they were going to make it into a movie, I was pleasantly surprised with how incredible it turned out. The story was good. The acting was top notch. The soundtrack was perfect. I laughed. I cried. I was pissed at God when Don (played by Marshall Allman) was. I yearned for God when Don did.  We loved church. We hated church. We enjoyed alcohol. We were embarrassed to call ourselves Christian. We were overwhelmed with the world outside of our Southern Baptist upbringing.

This movie poses more questions than gives answer. And that’s how it should be. This is art, not a sermon. Art shows. It shows you whatever the artist wants. Whether it’s love, anger, God, or lack there-of, it should not be an overpowering message but a subtle hint that makes you have to decide if that’s actually what the artist wanted you to think or not. If art wasn’t like this, a painting would not be much more than a child’s picture book. A song wouldn’t be much more than a nursery rhyme.

Also, this movie is PG13 because it’s an authentic portrayal of Reed College in Portland, of 20 somethings who are running from God, and of just normal, gritty life. There will be cussing, drinking, drugs, sexual innuendos, etc.

UPDATE (5/6/12): They have recently released the soundtrack for BLJ and it is really good. From the moment the trailer was released, I knew they were going to have some great songs in the movie. There are some up and coming Portland artists and even a song by the director, Steve Taylor, on the soundtrack. Get it here: